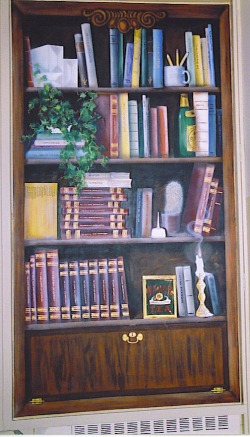 Trompe L'oeil:  (​French): "trick the eye", is an art technique involving extremely realistic imagery in order to create the optical illusion that the depicted objects appear in three-dimensions, instead of actually being a two-dimensional painting.

Other murals include exterior mural and faux brick and stone as depicted in the fireplace mural which did not exist until created by No Limit.  Also the faux cobblestone on the wine room floor.

Add some interesting accents to any room. Imagine the possibilities for your business, restaurant, kitchen, family room, dining room, foyer, staircase, wine room, poker room, bar, or garage...Your only limited by your imagination.

Paintings by: NO LIMIT ARTISTIC DESIGN

The Beverly Care Center is a facility that houses patients with dementia.
There were two sets of locked doors that were causing the residents distress from constantly trying to get through them.  Once the murals were painted the residents seemed to be calmer.
I have been told numerous times about the residents sitting by the fire and warming their hands.

Chartwell Eau Claire Care Residence
Another option on glass doors which is less expensive than a mural to calm the residents down:)

Restaurant Owner Hector loved the mural at the 'Discxchange' and wanted one for his Restaurant
'La Casa Latina' across the street to enhance the exterior of his business.